How Music Saved My Life 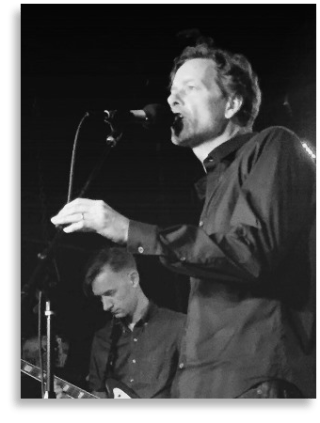 Music saved my life. Do I mean that literally? The more I think about it, the more I realize I do. As a kid I would sit at the piano when nobody was around and play things that made me feel something different, something bigger than the musty solitude of our dingy front room. The life of a musician seemed as remote to me as the life of an astronaut. I was just a lonely boy in a small town in the north of England who loved music.

Lonely because my family and most of the other kids I knew cared about things that didn’t interest me at all. I felt like an alien, an outsider — reading Camus and Kafka, listening to David Bowie and the Velvet Underground. It didn’t occur to me that music might be a way out. I thought getting out meant getting a degree, getting a job and moving to London. Which is what I did. And that was the beginning of the end of my life.

I didn’t know it at first. I was making money. I was living in a big city. I was going out to see great bands play at great clubs. I had a girlfriend; I had an apartment. All of which seemed cool for a while. The life I thought I wanted. Except it wasn’t.

I started writing songs. Something compelled me. My girlfriend at the time made fun of my first attempt. And her criticism made me realize how important it was to me. In that moment I saw myself through her eyes, saw the rest of my life stretching out predictably and joylessly ahead of me, and I knew it wasn’t for me.

A friend from work had an electric guitar. We got talking about music and he invited me over to jam. He fired up his amp and played some heart-wrenching chords progressions and I began to sing, and something came alive inside me. It was as if I had just been born, as if the first 23 years of my life hadn’t happened. I had never experienced anything so satisfying or so viscerally exciting, never felt so fully awake and plugged in.

I knew then what I wanted for my life. From that point forward, I was a musician.

I left London, moved to the US, and headed for New York, a place I’d experienced only through the grungy beauty of Sonic Youth videos, a place where you could be whoever and whatever you wanted. I quit my job as a programmer and tried to get work that wouldn’t tie me to a desk, to a career. Ironically, I couldn’t manage to get hired for hourly work. I was forced back into a desk job, sitting at a computer. And despite the grey, soulless monotony of corporate America, despite wanting to just put in the hours and go home and create, despite keeping my head down and trying to avoid attention, I found myself getting promoted, moving up the ladder.

As the years ground by, this success in a world that I had no love for, no passion for, was sucking the life out of me. The work hours grew longer and the responsibilities increased. I was depressed and desperate. I would head out in the morning and wonder how I was going to make it to the subway, never mind make it through the day. Time spent on music was like a pinprick of luminous, life-giving light in the darkness. When I worked on music, all my senses came alive. The sweet warm smell of the tubes in the amplifier and the woody tones of my guitar seeped into the dark womb of the recording space, filling me up again with hope and life.

I honed my craft. I wrote and wrote. Not just songs, but short stories and novels and a book of philosophy. I recorded volumes of music, hundreds of songs, finding my voice. I learned how to incorporate all of my greatest passions and interests into my music — philosophical ideas, human stories, fiction, art, the power of poetry, melody, and harmony. All of this came together in the musical projects I began to work on as Art Schop.

No matter how grim, no matter how hopeless and unremitting things seemed in the soul-destroying pretense of caring about the materialistic goals of the corporation, I always had music to return to, and the joy of music to provide a compass, a way forward. Having found myself as an artist, with my stories and books getting published, with a growing audience for my music, and with other artists asking to cover my songs, I knew I could somehow, some way survive as musician.

Music saved my life. It sustained me during those hard, dark times, and it gave me the strength, determination and ambition to do what I knew I had to do to stay alive, to quit my corporate job and begin my life as a musician.

Since then I’ve recorded in studios that have produced some of the greatest albums of all time. I’ve played in clubs I once knew only as a music fan. And I’ve recorded and played with musicians whose records sit on the shelf above my record player. I’m alive!

But most importantly, and this is the reason I’m putting this all down, none of this would be possible without YOU, the listener. I make music for people who care about it as much as I do. Who play a song or put on a record to get transported to another place. For whom music is a sustaining force of life.

I’d be really thrilled if you’d take a listen to my latest album — “Death Waits I: Music And Fine Arts“ and let me know what you think. It’s inspired by the life and work of an eclectic range of musicians and artists, including David Bowie, Lou Reed, Will Oldham, Sappho, Michelangelo, and more. You can take a listen here.

There are no comments yet, add one below.